Moving to the States, Time for Reshoring 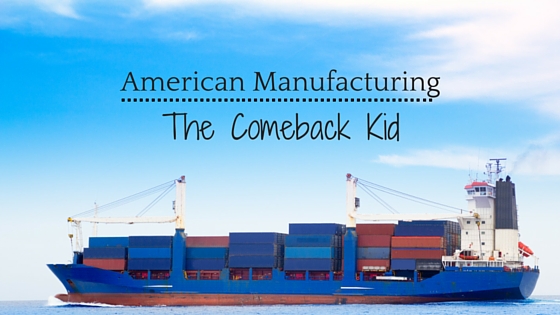 Reshoring is just the tip of the manufacturing iceberg. While manufacturing is returning to the States, a large amount still remains abroad. The manufacturing sector is reevaluating production decisions based on total costs and the real risk factors. Since 2008 the economy in The United States is becoming more attractive to manufacturers and companies are reshoring their production.

Manufacturers moved their facilities abroad to leverage cost savings in the form of low-wage labor. What they didn’t consider, was the Total Cost of Ownership (TCO). The manufacturing cost savings hasn’t been enough for some producers. The numerous unforeseen risks and costs have diminished their initial hope of savings.  Moving production facilities and equipment has proven more expensive than predicted.

The distance proves to be another problematic factor for large and small companies. Entrepreneurs can’t always afford the time or the expense associated with traveling to China. Companies don’t have the time to wait for prototypes to be sent back and forth when they quickly need to react to changing markets. One major hidden cost is the amount of money that is tied up in inventory on ships crossing the ocean.

It can be very difficult to manage a facility that is a state away, let alone a manufacturing plant that is over thousands of miles away. Quality has been an expensive risk for many manufacturers. Their customers are accustomed to a certain level of quality and for many that has changed when production was moved abroad. Good quality control and assurance have become increasingly difficult to manage with changing suppliers and government regulations. It eats away at the bottom line but also changes the way that a company is viewed in the public eye. When the integrity of the products begins to decline, manufacturers are having to take bigger steps to recover.

When quality slips it brings up more concerns. Producers are realizing the value and benefits of having their manufacturing and development facilities much closer. It allows for faster implementation of new products and processing methods. When development is separate from manufacturing it hinders training and knowledge of employees. The proximity aids in learning which benefits improve processing and growth of employees. Not to mention it is strategically difficult for management to monitor their supply chain when the locations are all over the world.

What’s Changed and Why are Companies Reshoring?

Things are changing that have made doing business in America more enticing since the 2008 recession., while the environment abroad has become less inviting and the risks too costly.

With the development of fracking, the United States now has the 2nd largest shale gas reserve. The use of fracking by extracting gas and oil from shale rocks by fracturing them is opening the opportunity for sustainable energy cost for businesses.  These lower prices give U.S. manufacturers a competitive advantage, adding further incentive for reshoring.

The technology advancements in automation and robotics are increasing the efficiency and precision of which products can be produced. The costs to produce these machines are shrinking although, it can be argued that these machines will displace workers and ultimately won’t add jobs. However, they will still need to be made and managed by someone and as the demand for them increases the need for workers will also increase. The automation of some manufacturing processes provides an edge. It will minimize the labor intensity of some products, making them affordable for more Americans.

The wage gap in China is shrinking and manufacturers are losing out on the benefit of low-cost manufacturing. The wages have increased an estimated 7.1-7.8%, with the largest increases going to upper management. The salaries of senior management in China, Turkey, and Brazil now either match or exceed those of the salaries for U.S. and European companies. Additionally, the workers are demanding more rights, which has increased the number of labor strikes and unrest throughout the industry.  These changes within the workforce have begun to erode the savings that producing overseas once offered.

In 2013, Bill Simon, President of Walmart, made a big promise to bring back manufacturing. Walmart committed to purchasing $250 billion in U.S. made products from 2013 to 2023. This commitment has become a large force behind many of Walmart’s existing vendors to reconsider bringing their production back to the United States. The initiative that they have taken has already sparked a first wave of manufacturing to return to the United States.

With all of these factors at play, it’s no wonder that companies have already begun seeing the value in having U.S.-based manufacturing.

Packing Up and Moving. Who is reshoring?

Offshoring initially was an effective way to reduce production costs for manufacturers. In last 15 years, the environments of those countries are no longer as attractive and the risks have been exposed.  We gathered a few examples of manufacturers that have taken steps to reshore some or all of their production. Each company has different reasons for moving production; while some are expanding or introducing new facilities in America, others are scaling back on their foreign direct investments abroad.

Do you know a company that is reshoring? We would love to hear the story. Leave us a comment below.

For more examples of other companies that are reshoring or moving their foreign direct investment please visit Reshoring Initiative. Looking for an employment opportunity in manufacturing? Check out our opportunities.

Read more: Why It’s time to Bring Manufacturing Back Home, A US Hat Maker’s Quest to Support Middle-Class Jobs, Walmart’s ‘Made in USA’ push, Walmart’s Pledge

We promise we won't fill your inbox.
By Samantha Leenheer|American Made|4 Comments